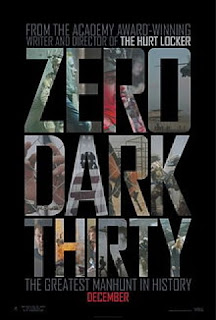 Attempts to properly chronicle the post-9/11 era have more or less been clumsy up to this point. In fact the mere mention of the term post-9/11 in connection to a work of art creates a resounding groan amongst pretty much everyone. Cut-out terrorist villains and reductive Bush-Cheney allegories have plagued western media for a decade, trying sincerely, but inadequately, to inject some relevance to an audience used to a uniquely depressing news cycle. What that era, and my generation to an extent, is lacking is an artistically strong and well-defined artistic narrative that is both challenging and uncanny in it's familiarity. When I studied the film, music and literature of the Cold War I was amazed with how the artists of the era were able to break down the largely political conflict into it's basic components and use them to construct a both timely and timeless examination of how this defined a culture. Placed in the sweet spot between emotional immediacy and historical perspective, Zero Dark Thirty has hit that mark.

While advertised as a dramatization of the raid that killed Bin Laden Zero Dark Thirty is actually a decade spanning drama of one woman's dangerous obsession with capturing the most wanted man in the world. Jessica Chastain imbues Maya with the right mix of professional distance and personal drive; she's a fully formed character, and an interesting one but she is also drawn in such a way as to stand in for the emotions of an entire nation. The audience is drawn into the pursuit in what should be the most tacky and exploitative scene ever put on film: an imageless sound collage of the phone calls from within the twin towers. At first it seems Bigelow is carelessly trying to pump up the audience's bloodlust in anticipation of the rootin-tootin terrorist-shootin' finale but this film is much more complex.

The film sinks deeper into shades of grey as it goes on, without making the false assumption that 'humanizing' terrorists and turning the CIA into mustache-twirling villains is the way to achieve that. After the monstrosity of the twin tower bombing we shift to a detainment camp in Pakistan where Joel Edgerton ruthlessly, though somehow not sadistically, tortures a suspected bankroller of terrorism. The torture is brutal, realistic and uncomfortable yet we never quite sympathize with the victim. There is no question about his guilt and after having 9/11 vividly replayed for us it's hard to ultimately care about his fate. Yet the scene is unquestionably confronting and uncomfortable not because of the victim but because of the perpetrator. The reasoning behind the opening scene now becomes clear: it's not about justice or security but about revenge. From there the film establishes it's rhythm: the terrorists attack innocent civilians and the CIA repay them with cruel and unusual punishment. The bodies pile up higher on both sides and Maya's involvement goes from disturbed reservation to complete complicity in her pursuit of, in her mind justice and security but in reality, revenge. In establishing this rhythm Bigelow finally hits on what defines this moment in history. Where the Cold War was an absurdly abstract dialectical conflict that played out in absurdly tragic ways, the War on Terror was the geopolitical equivalent of a cat fight, dirty and degrading for everyone involved.

There's a telling scene where Maya confronts here skeptical boss (played fantastically by Friday Night Light's Kyle Chandler) about his lack of interest in capturing Bin Laden and he tells her that he's a symbolic target rather than a practical one. She lays out the reasons why he is indeed an essential target in protecting America and we are meant to agree with her, being the feisty heroine that she is, yet it's hard not to realize how strong a point he has. What really is the point in finding Bin Laden? Once again, the answer is revenge. The beautiful part of the film is that it never judges or disagrees with it's characters, and by extension America, for needing that revenge. Maya and her country need that closure of putting the bullet in Bin Laden's head but it's not any less sad that they have been put in that mindset in the first place.

As the film unfolds and these complex emotions surface it almost feels like the Bin Laden raid would make for an ill-fitting climax dramatically but instead we get the perfect cap off to a great movie. Bigelow channels all the technical bravado she gained from The Hurt Locker into a sequence that is both thrilling and strangely distancing. The exploits of the navy seals are performed in such a methodical way that killing Bin Laden fills like a menial task that simply has to be performed. There is no carthasis or sense of victory when the bullet lands, merely a sense of relief that the last nasty ten years can finally be brought some kind of closure. As the final shot reinforces (I won't spoil it) the events of the film are not meant to inspire fist-pumping pro-Americanism or fire up liberal anti-Bush vitriol, they are a complex and dirty affair. And a very sad one at that.
Posted by Cavaliers Do Cinema at 05:49

Email ThisBlogThis!Share to TwitterShare to FacebookShare to Pinterest
Labels: Review