Blow Out: Stop Being Mean To De Palma 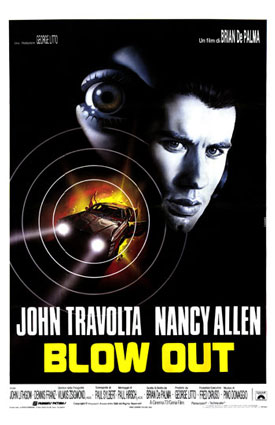 Let's be honest, most people think of Brian De Palma as the Ringo of the film school brats. He's made his fare share of crap but so has everyone. The unfortunate fate of De Palma was that his artistic and commercial successes never really overlapped. While The Godfather, Apocalypse Now, GoodFellas etc. managed to be blockbusters and masterpieces at the same time, De Palma will forever be remembered as the director of Scarface and The Untouchables, a poor-man's version of his peers' gangster epics. But Blow Out says otherwise. Blow Out straddles the line between a cult phenomenon and a bona fide classic; every critic and filmmaker worth his salt has seen it but it was a box office bomb and there was no hurry to see it released on DVD. It's an unfortunate fate for such a great film.

De Palma essentially redoes Blow Up via The Conversation while layering on his own love of voyeurism and meta-commentary. The film is relentless in it's deconstruction of cinema as a medium but he wisely chooses to use cheap exploitation trash as his starting point. We start with a ludicrously T&A filled slasher film that faithfully recreates the genre fare of the time, while simultaneously rising above it thanks to De Palma's skilled use of the long-take. We then meet John Travolta's sound engineer protagonist, who must find the 'perfect scream' for his sleazy producer. As he goes to collect ambient sounds for the film he witnesses, intervenes in and records the most sensational political crime/scandal imaginable.

From there the film manages to stage one scenario after the other where the manipulation and unraveling of the relationship between sound and vision are key to solving the central mystery. It's a clever trick that is executed by a director at the top of his game. What makes Blow Out so satisfying is that the superficial sophistication of Blow Up and The Conversation are disposed of as we are surrounded by images of urban sleaziness and B-movie schlock. Meanwhile, the central mystery plays out as the most sensationalist culmination of Watergate, the Kennedy assassination and Chappaquiddick. This let's the films true intelligence seep in through the cracks as De Palma's broader points works with, instead of against, the popcorn thriller on the surface.

Posted by Cavaliers Do Cinema at 07:52

Email ThisBlogThis!Share to TwitterShare to FacebookShare to Pinterest
Labels: Diary